The Calgary Real Estate Board released their Mid-Year Forecast for 2015 and announced that, Continued weakness in housing demand will limit downward pressure on supply levels and cause prices to ease in the second half of the yearDespite this anticipated retraction, Calgarys benchmark prices are only expected to decline by less than one per cent on an annual basis.

The expectation is that there will be fewer jobs due to a slower recovery in the oil and gas sector.  As REIN teaches, this makes sense.  A declining Gross Domestic Product (GDP) means fewer jobs, which means a declining number of people moving to the area for employment (or leaving all together).  This puts pressure on the housing market resulting in a higher vacancy, lower or stagnant rents, and declining house values. 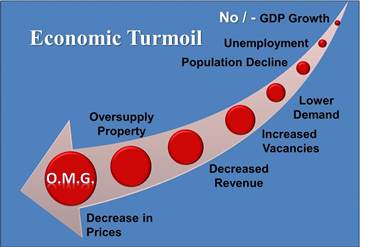 Don R. Campbell, Senior Analyst at REIN believes that the second half of 2015 will be an interesting time for the Calgary real estate market. We will witness a continuation of the market fracturing, where some segments will continue to enjoy close to long term average in demand, while others witness a strong drop off.

CREB® chief economist Ann-Marie Lurie states, While slower demand is impacting all sectors of the market, the apartment sector is expected to record the largest pull-back in both sales and price growth in the second half. Challenges in this segment are linked to the rising supply in competing markets. There is more selection in the detached and attached segments, which makes it difficult to attract buyers. Sellers also faced added competition from new apartment units and increased selection in the rental market.

There have been fewer showings in the luxury market given the steep decline in oil prices over the last 10 days. This slowing of showings, meaning the slowing of sales at the high end of the price scale, will bring down the average price.

As Don states, There continues to be demand at the lower end of the scale, where it continues to often be more affordable for consumers to buy than to rent.  Rental increases have tapered off; however, they remain high. These high rents versus the record low mortgage rates available, are moving people into the purchase market who would normally rent for a while longer. This is mostly being felt in the resale market, rather than new-build market..

Rents remain high because of the low vacancy rate due, in large part, to the City of Calgarys council inability to find a way in which to create more supply through creating safe and secure secondary suite legislation. Calgary will be the city in the country that will feel no effect from CMHCs recent policy change allowing 100% rental income from a legal secondary suite to be considered when qualifying for a mortgage.   This will make it more difficult for Calgarians to take a care of their aging parents”, Don was quoted as saying.

Melanie Reuter is the Director of Research with REIN and a Real Estate Investor owning both single and multi-family units. She has a Master of Arts Degree from California State University, San Bernardino and a BA from Simon Fraser University in Burnaby, BC.